The complex is designed as a campus environment which adds to the existing Supreme and National Courts Building. Three new buildings totally over 25,000m² are being constructed. These include a 5-level Courts and Judiciary building with 14 new court rooms, a 3-storey administrative support building with space for registries and support agencies and a single level security arrivals building.

The new courts building is designed for optimal spatial efficiency through vertically stacked courtrooms and centralised circulation zones and services. Court rooms are standardised and used for either criminal or civil cases.  The ceremonial Banco Court is able to be converted into a major conference facility. The building structure is overlaid with screens that add depth and colour to the facades with the feature screen to the ceremonial court constructed from woven concrete structure emblematic of Papua New Guinean billum bags symbolic of the interweaving of the diverse PNG cultures.

This brand new 5 Storey high City Hall admin building at Waigani is a new landmark for the capital.

The major challenge of the project was to upgrade the original engineering design by local consultants to Australian standards. This was achieved by our Australian project team in partnership with the Chinese-based main contractor, and incorporates a combination of Australian and Chinese materials, equipment and construction practices without compromising the high quality build standard.

The building was inaugurated in July 2015 prior to the 2015 Pacific Games Port Moresby and was hailed as a major success story for collaborative, multi-national engineering. 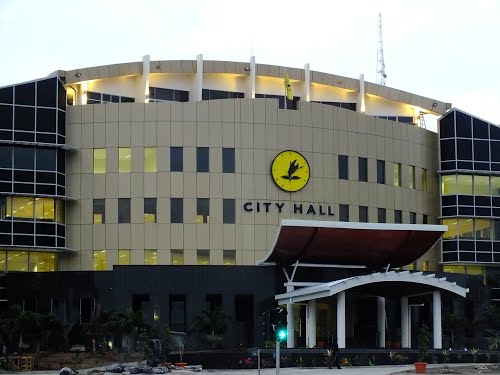 A multi-disciplinary structural and civil engineering design team has been working across half a dozen projects in the Solomon Islands to the east of PNG, with the majority in the nation’s capital Honiara.

Rove Armoury – a new facility at the country’s police headquarters is now complete, as is the Ministry of Finance Treasury Building.

With the building being in very close proximity to the ocean, the ground floor level was built up to mitigate potential flooding issues which also allowed to detail safe overland stormwater flow paths to be maintained around the new building. The civil works also involved a maintenance access road to the services plant zone.

To complement the Ministy of Finance Treasury facility, the team has also designed a new IT support building, which is out to contractor tender.

Also out for contractor tender are a new fire station facility in Honiara and a new police complex in Tulagi.

Finally, design for the Justice Precinct – which features 3 buildings, including a magistrates court – have been completed to 70% design.